so I have altered my banner photo which used to show several sheep in the foreground.  I did think of keeping the same view and substituting red deer or cattle! However, this area of the Moor would rarely have red deer grazing close to the Baslow Road, whereas the cattle have made this area their own!  In the end I have chosen a new view altogether.

This is the old header picture.

But on the subject of cattle – I love these highlands and longhorns  and much prefer them to the sheep.  They are more photogenic if sometimes a bit boisterous – 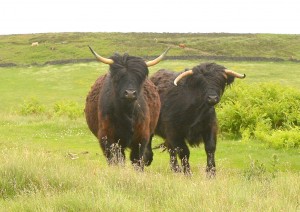 – but they do not walk in a line like sheep do!  They trundle across the moor at will without using paths and as a result do not keep the old sheep tracks open.  These ‘paths’ were always a boon to walkers like me who wanted to go ‘off piste’.  Many of these tracks are now becoming overgrown and lost.  Perhaps in time we could have a few sheep back to balance things out.  I know the sheep ate the young heather shoots, especially in winter and they ignored the long grass that the cattle will eat but I am sure the cattle are ignoring the long hard stuff while there is plenty of the more juicy fodder available. 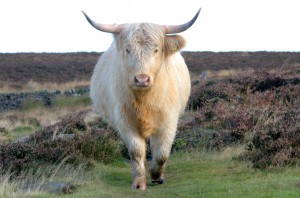