The Middle Ages covers the time after the collapse of the Roman Empire up until around the 15th Century.  Throughout Britain this era began with the Dark Ages when the country suffered from the decline in roads and buildings after the departure of the of the Romans.  The Norman Conquest led to the beginnings of trade and improved agriculture which grew increased over the centuries to come.

How did this affect Big Moor?  Well to be honest – not very much.  The farmers of the Bronze Age had moved to more fertile pastures and the area was left virtually untouched, and this, in part, accounts for the considerable number of archaeological sites still visible today.

The only exception was the need for travellers to cross this moorland.  Spurred on mainly by trade, routes slowly became established between the Derwent valley in the West and the new towns of Sheffield, Dronfield and Chesterfield in the East.  The dominant trade in the 13th Century was in salt from the Cheshire salt mines.  This was brought by packhorse through Buxton and Tideswell to the Derwent valley. They then crossed the Derwent at Baslow, Calver, Froggatt, Grindleford or Hathersage. That  was the easier bit for after that there were realistically only 3 ways up onto the Moors which had to be crossed without a very long detour.   From the northerly villages the route went up Surprise View, past Lady’s Cross and down though, what is now, Owler Bar.  To the South the route climbed up what became the Bar Road onto Eaglestone Flat and across to Wigley. 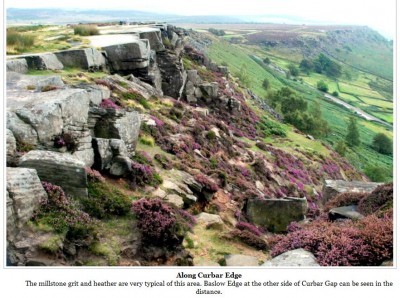 However the main route appears to have been from Calver, through Curbar and up Curbar Gap before crossing the Moor towards Wigley.  It may have been during this period that the religious references were carved on several stones up this route as shown in detail within part of the Sites of Meaning website:

It may be, of course, that this carving was done at a later stage.  No one really knows but it would seem logical that the religious fervour of the time would lead to these carvings as an encouragement to travellers on this arduous climb.

Before too long these main routes lead to minor trails criss-crossing the Moor and an aerial photograph still clearly shows these ‘holloways’ which have been imprinted on the landscape by generations of packhorses. 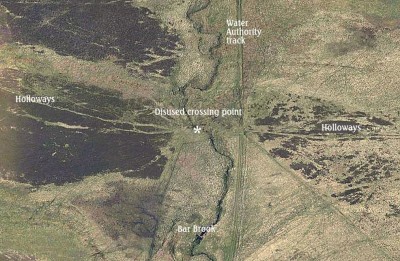 In the early 18th Century Parliament decreed that all routes across open countryside should be marked at regular intervals with guide stones – officially known as Guide Stoops.  Many countryside areas simply ignored this instruction but Derbyshire was one of the few to erect these stoops especially across the Moors and I have designated a separate page to catalogue all the Guide stoops around Big Moor.