In 2000 BC the population of these islands is calculated to be in the region of 1,000,000.  Much of the countryside was covered in woodland but in places this was been cleared for agriculture.

There is little evidence of man on Big Moor before the Bronze Age, which started around 4000 years ago.  At that time the climate in this area was warmer than it is today and there is good evidence of areas of land being cleared for farming.  This is particularly noticeable on the flat plain above Swine Sty and, as a result, much research has been done around here.

There are 2 Big Moor notations for ‘Field System’ and these are either side of the Bar Brook to the north east of Swine Sty. 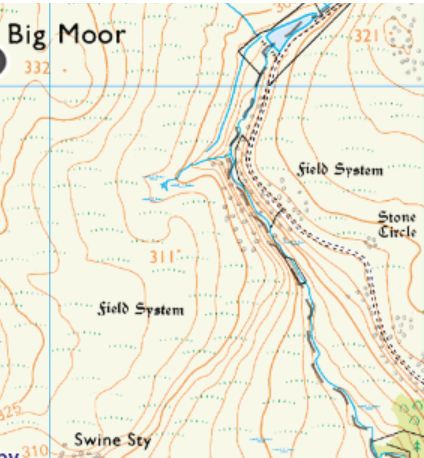 The fields were not as we know them today as they were mainly areas where stones had been cleared to give patches of land on which crops could be grown.  Almost incidental to this clearance was the fact that the stones formed rough ‘walls’ around these patches and these are still visible.  Much of the agriculture was arable but some livestock was kept, with sheep and goats becoming increasingly important.

The Derbyshire Archaeological Society have written extensively about this region in their Journal, and with acknowledgement to them, I reproduce their map of the Big Moor Central Field System – 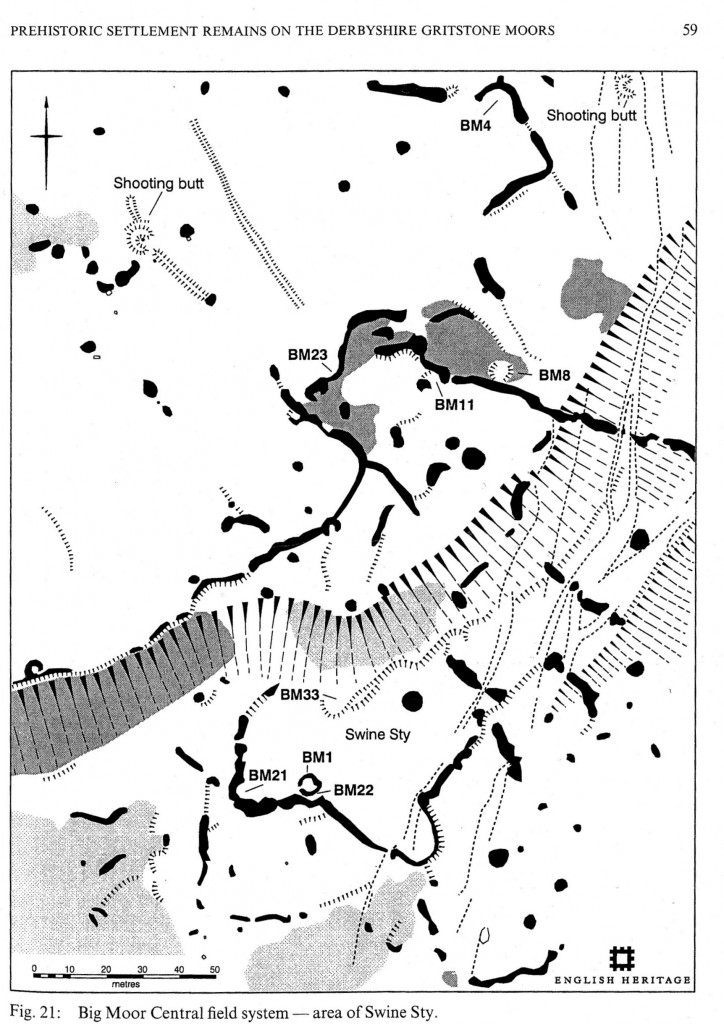 A visitor to Swine Sty will see what remains of the wall of this round house as well as evidence of the surrounding features.  Evidence of other houses has been found nearby showing that in the Bronze Age this was a thriving community.  This is not surprising as this area provided many of the necessities of life.  The Bar Brook gave a constant supply of water, the land was sufficiently fertile for agriculture, the high land kept the inhabitants above the swamps and flood plain and the surrounding woodland gave fuel for their fires and building materials.  In addition the bogs, swamps and millstone edges gave some natural protection from attack by other tribes or wild animals

With the people came religion, ceremony and burial rituals and the uplands of Big Moor are littered with evidence. There are at least 4 stone circles and numerous burial chambers as well as cairns and some evidence of rock art. 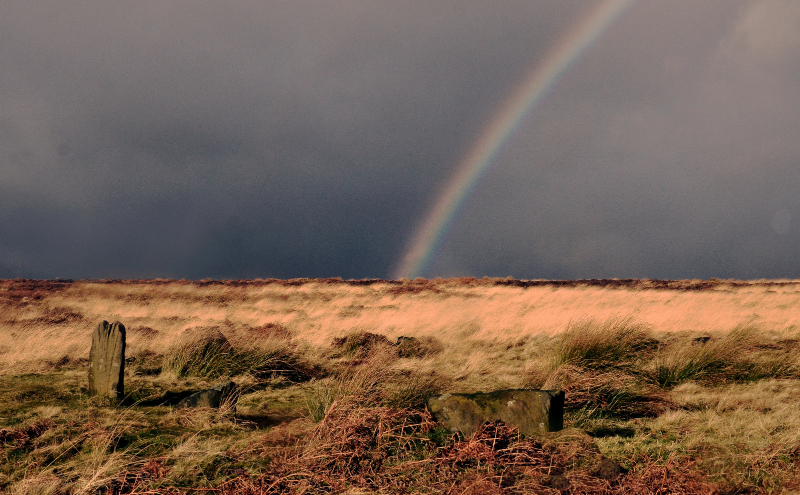 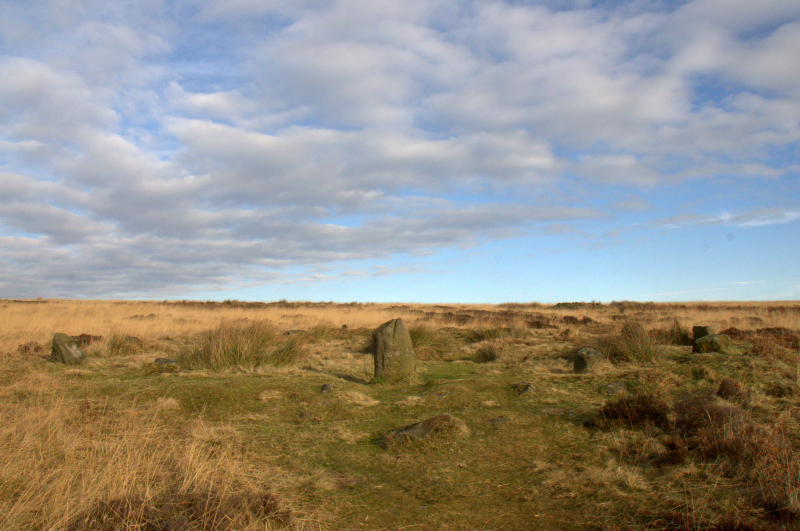 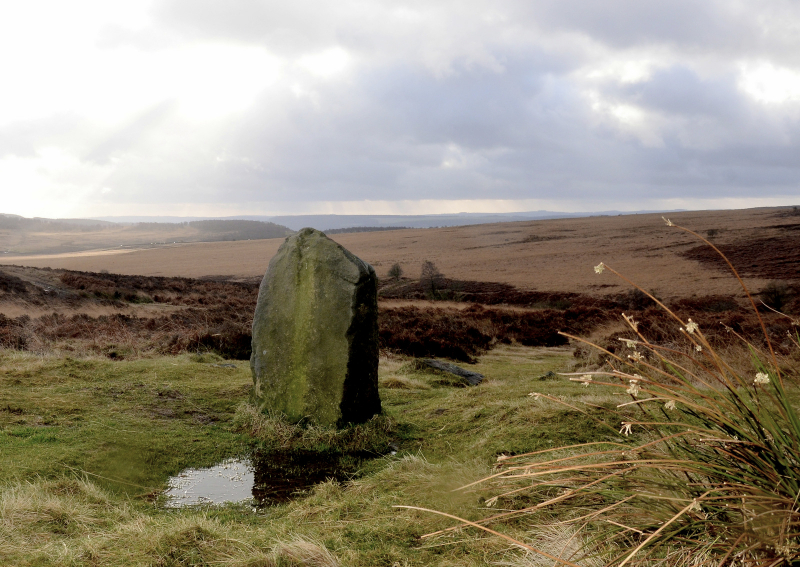 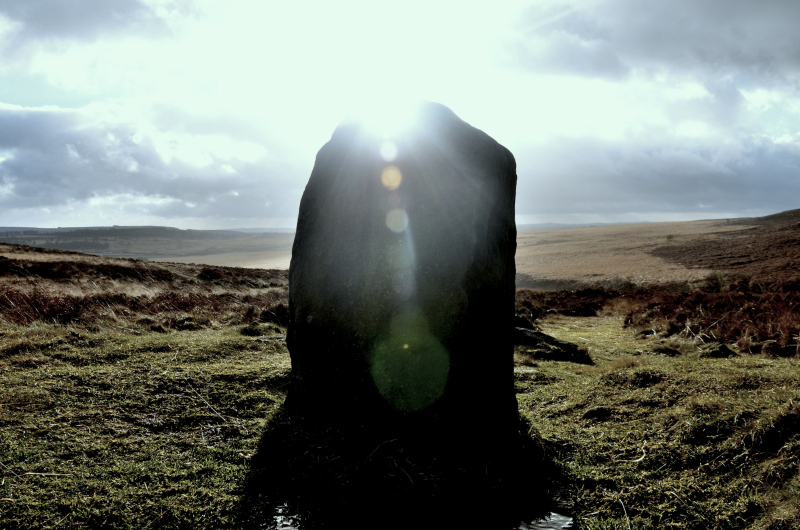 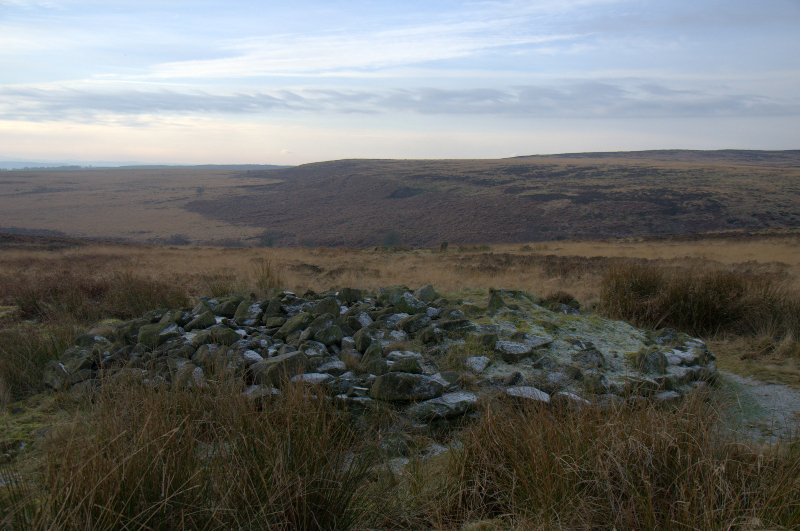 The third, fourth and fifth pictures in this series look out across the Bar Brook valley and where the lighter grasses meet the darker bracken is the site of the Swine Sty dwelling. They would be able to look to the east and see the stone circle less than a mile away.

A short distance to the north is Barbrook 2 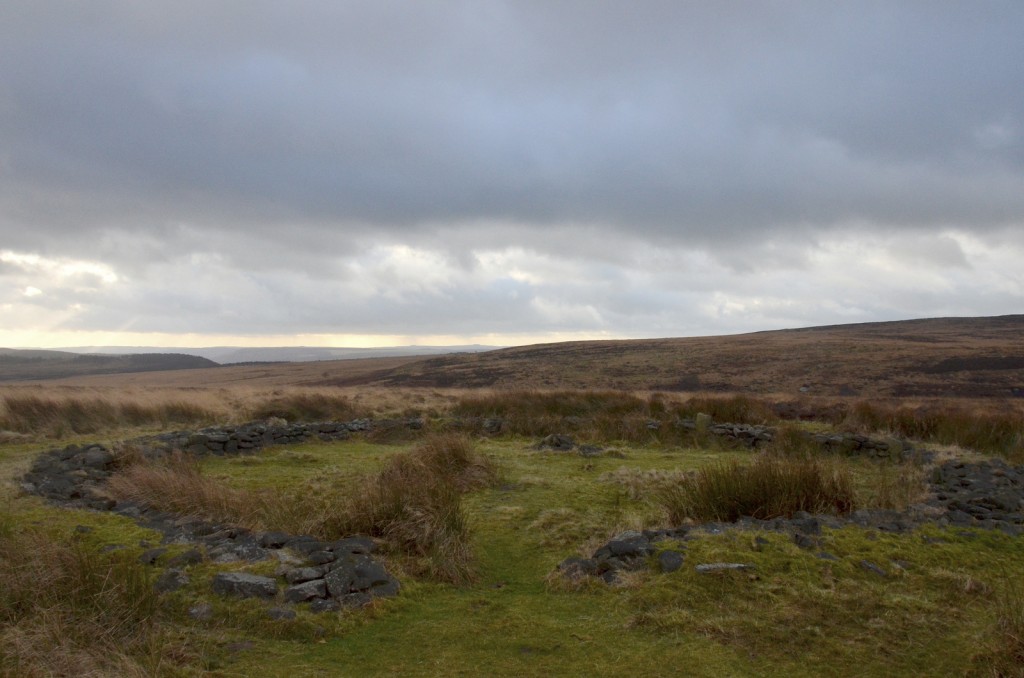 Barbrook 2 is a far more elaborate construction, being a continuous dry stone wall very reminiscent of the foundations of a timber house.  The experts do however agree that this was not used for human occupation. At regular intervals around the wall are vertical stones which may have been the seating positions for tribal elders or religious officials.  Unlike Barbrook 1 this second structure has had a fair bit of reconstruction after vandalism in the late 1980’s but has hopefully been restored to how it was before then. Excavation beneath the central cairn has found evidence of human cremations.

Much significance has been put on the position of the entrance to the circle but without knowing the exact position of the sun at dawn in mid summer or mid winter it is impossible to draw any conclusions due to the change in the earths axis over the last 4000 years.

A more detailed analysis of both these circles and all the other archaeological gems can be found in the records of the Hunter Archaeological Society or the Derbyshire Archaeological Journal, copies of which are held in both Sheffield and Chesterfield Local Studies Libraries.

One final point of interest in this short historical precis is the evidence of shale bracelet manufacture on both Big Moor and Totley Moss. Below is a map of the Swine Sty house and the results of excavations showing the discovery of fragments of flint and shale 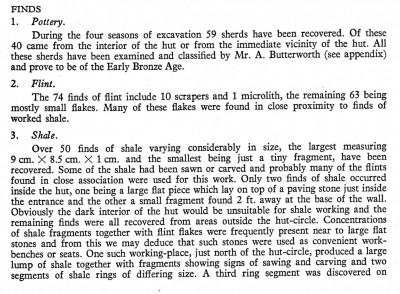 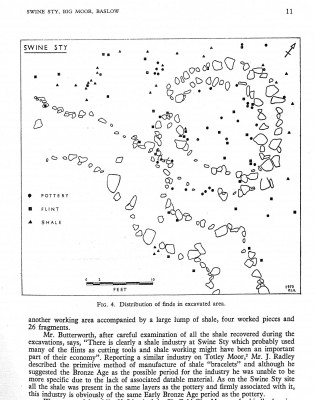 Because of the acid nature of the ground, there is little physical evidence of any of the timber constructions but the hard gritstones have lasted well.  In addition this land was virtually unused in later centuries as with cooler climates the inhabitants moved to lower more temperate regions meaning that any stone structures were left to the mercy of the elements and the occasional farmer.  As a result we have a good understanding of how these people lived 4000 years ago.