For 11 months of the year the Moor is quiet apart from the occasional bird or the wind blasting everything in site.  In October however things change.  The migrant birds have departed and others such as the curlew have found more sheltered homes on the coast until the Spring.  Now is the time for the red deer to come into their own.  This is rutting time.  From early morning until after dark their low bellows can be heard for up to a mile away.  The sound is more like something you would find deep beneath the ocean rather than out here on the moors. 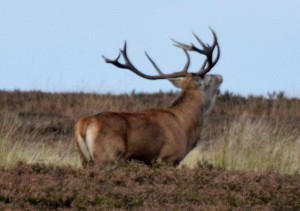 Big Moor has over 120 red deer of which at least a quarter are stags although many of these are too young to breed.  Just a few senior stags rule the roost and most of these round up 3 to 5 hinds (females) with which to breed.  However each year at least one dominant male gathers a harem of at least 15 hinds – 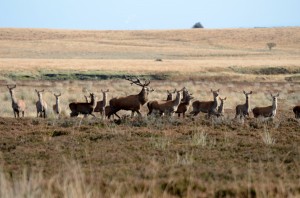 I have called this chap Boris and he has his work cut out preventing his wives from wandering off and being claimed by other stags.  There is a constant string of challengers to any  of the stags with hinds. Much bellowing and posturing takes place  before any actual fighting begins but fights do happen and can be quite bloody.  This is scarface – you can see from the inset his scarred cheek and bloodshot eye. 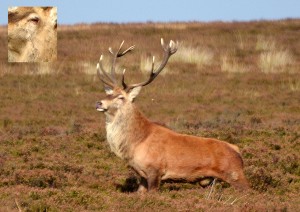 With so many hinds in one large family there is a shortage of females on the Moor and many of the males miss out and spend their time with the juveniles and hope for better things next year.

More pictures of the 2011 rutting season –