Recently I bumped into a chap and his son looking for the site of a crashed Wellington bomber from the 2nd World War.  There is a book dating back to the 1970’s which specifies many of the sites in the Peak where planes crashed either during WW2 or during the Berlin airlift. I know there are numerous such sites around Kinder and Bleaklow but a site on Big Moor was something new to me and I promised to find out what I could for him as they were unsuccessful in their search.

Once again Danny Udall from the Eastern Moors Partnership came up trumps and advised me that the wreckage from this crash was removed from the Moor some time ago – presumably to stop it becoming a tourist attraction as at that time the Moor was still inaccessible without permission..

The crash site is to the north east of Lucas Moss about half a mile from the Hurkling Stone.  Evidently there is no indication whatsoever at this location that there has ever been a crash there. In fact this is one of the few places on Big Moor where there is very little of any significance apart from the usual herd of red deer who have you under surveillance at all times. 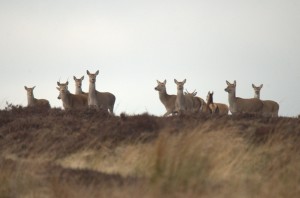