As mentioned on my home page, Bert Ward was a campaigner for countryside access and had a thirst for knowledge about all practical matters to do with these moors. He had a profound knowledge of by-ways, marker stones, local history and the people who lived and worked around this area over the generations.  He wrote extensively in the Sheffield Clarion Ramblers annual booklet which was published most years in the first half of the 20th Century – 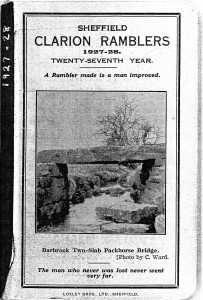 These booklets were all about 12 cm by 7.5 cm and were only around 1 cm thick.  I assume they were this size so that they would easily slip into a pocket or rucksack.  Copies of these booklets are available to inspect in Sheffield Local Studies Library and Derbyshire Local Studies Library at Matlock.  For me they give a real insight into life around the moors at this time.  They also shed light on the constant battle that walkers faced in trying to gain access to some of the most beautiful parts of Derbyshire.

Bert talks little about wildlife and nature in general.  He obviously appreciates the grandeur and beauty of the area but rarely writes articles about flora or fauna. Instead he talks about ownership of land, the history of buildings and the paths to be taken across the moors. He also repeats yarns usually overheard in a pub or over a cup of tea and adds a little poetry and home spun philosophy.

Here is a sample of his work: 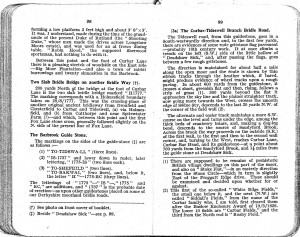 I appreciate this particular article on several levels.  Firstly it shows his analytical mind when confronted with a Guide Stone.  At the same time he is trying to describe a route to be followed in an era when maps were few and far between. However, what I really like is that he occasionally uses words which need to be brought back into the English language. Just in the first 2 paragraphs we have a ‘town’ of rabbits and soon after, my favourite word of all ‘sinuosities’ – the meanderings of a stream!

Talking of maps Bert must have enjoyed these as he drew several.  Here is an example-

Within this section I propose adding some of the pages Bert Ward wrote for the Sheffield Clarion Ramblers.  I would love to include all his writings but this is a job far too big for this site.

Here is the link to the Wikipedia information about GHBW:  http://en.wikipedia.org/wiki/Bert_Ward