Only the 23rd of March and yet tee shirt weather, even at 1200 ft, on Big Moor!!  The bogs have dried out a bit making walking somewhat easier but still heavy going under foot in many places.

I set off to replicate my walk from last week but this time took all the camera gear with me to capture the deer near the disused reservoir.  Of course when I got there – not a deer in sight.  Although they are more sheltered in this dip I think they feel safer on higher ground and, as expected, I found some of them about half a mile away on a rise further south.  In such a location there is little chance of getting anywhere close and they had spotted me before I spotted them.  This was a group of about 30, so where the other 50 were I didn’t find out.  What was surprising was that all the deer in this group were without antlers.  2 choices therefore.  Firstly they were all females and the boys were elsewhere or secondly the males had shed their antlers and at this time of year were undistinquishable from the females.  I know that the females form large groups but the 80+ I saw last week had many males in it. 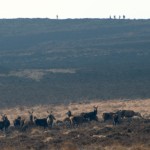 Deer 300 yds away and walkers half a mile behind them

In all the time I have been walking these hills I have never seen a shed antler or even a bit of one.  I know the males eat the shed antlers to take the calcium back into their bodies but you would think the odd bit would be left lying around.  Have I got it wrong?

If next time I am up there I find males who still have their antlers then I will know it was an all female group.

Knowing that close up deer photography was a waste of time today, I made for the small Barbrook Reservoir.  On the way I heard my first curlew on the Moor for this year.  They winter on fields at lower altitude or on the estuaries and it is always comforting to hear their return even though it is a piercing melancholic tune.

Barbrook Reservoir is photogenic even without wildlife and on a day like today it was an idyllic place to be.  It was here I bumped into an interesting wildlife photographer who was out looking for adders.  He showed me pictures of previous encounters and made me resolve that this years top priority is to find an adder on Big Moor.  According to Roly Smith in his excellent guide ‘Peak District Eastern Moors and the South’, this is one of the best locations to find adders!  We shall see.

Back to the car by way of Barbrook 3 stone circle.  This is a most insignificant group of rocks but does have an impressive circumference of around 70 meters.  In the summer you cannot even find it once the grass has grown and there are only around 15 stones remaining.  I think originally there must have been near enough 30 but nothing of any height unless all the big ones have been reused for gateposts or bridges!

A good day out with little to show for it – but sometimes these are the best!